There are a fair few between the Foundry and Crusader command figures. The Foundry ones are bigger, with floppier hats, and a little more detail - or so it seems. Nothing so enormous that it will be noticeable in the end, but an interesting curiosity nonetheless.

A side note, that may interest some of you (and it may not); I have begun to publish the poems that I have been writing for a long time; you can find my works here and here. 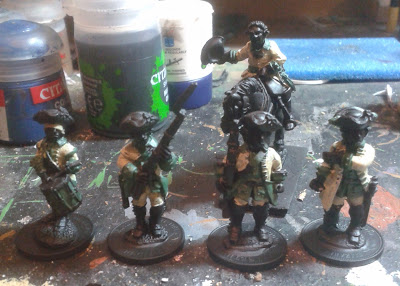 I haven't done much to them; but the basecoat at least makes them look a bit more like paid-up members of the regiment. I like the colonel, a lot, although he really needs a name.
Posted by The Worker at 15:43 1 comment:

Today I made much great progress towards getting the command of the second battalion of the Liebgarde finished, as you can see: 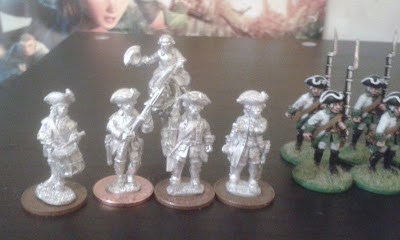 Well, they're standing up and de-flashed. That's a start, right?
Posted by The Worker at 17:20 4 comments:

Today, I had a long day at work (having overslept, and getting Worker Jr out of the door to school ably assisted by AlFront, I just got the train on time - not an experience I wish to repeat), followed by an evening's silliness with friends in the form of the absolutely excellent board game Shogun by Dirk Henn, and then three rounds of the sublimely ridiculous Cash 'n' Guns - it has foam pistols, and you point them at each other.

Anyway, I staggered out of the horseless carriage and got home to find a nice little package from Wargames Foundry waiting for me! Hurrah! 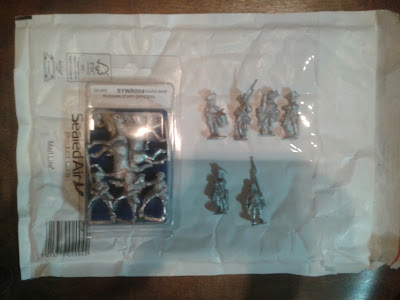 Unfortunately I have no black spray - I finished the last of my previous can on a load of techno-future-space-warrior chaps and will have to make a journey into the nearby burg of Leamington Spa tomorrow to furnish myself with enough undercoat to do not only these fine gentlemen but next month's batch of musketeers.
Posted by The Worker at 17:30 7 comments:

Before Christmas I ordered Osprey Men-at-Arms 298: Russian Army of the Seven Years War (2) and it arrived today, at last! Hurrah and rejoicing! 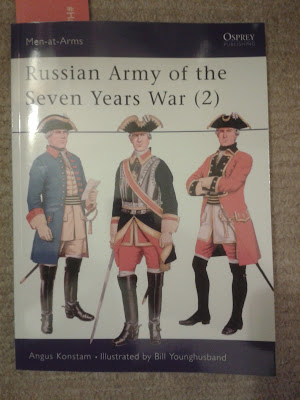 I have been having a nose through it and I am struck by the mono-colour uniforms of the Hussar regiments - at least, apart from the Serbski Regiment's red-and-yellow uniform. "All red" or "all blue" with black trim. Very striking - if somewhat disconcerting as a painter. Still, it'll be a while yet til I get to the Molgravian Hussars.

What I have done is to place an order with Wargames Foundry for some command figures to go part of the way towards finishing off the Leibgarde zu Fuss (as I was advised to do so by Tradgardmastare, Musketier and Chris Platt in the comments*) and - a pack of foot command, and a pack of three mounted officers. The prices! £12 a pack! I'll get the remaining 16 infantry next month from Crusader Miniatures, but I think I'm going to have to bite the bullet and get Foundry for most of the rest of the project just because they have such an enormous range of figures.

Any road, until they arrive it's going to be all quite on the Molgravian Front I think, unless I dig out my back issues of Battlegames and try my hand at building a map of Molgravia and its environs...


To celebrate the changing of the year, I only went and finished (apart from that flag...!) those last eight chaps in the Liebgarde, didn't I?

So now I'm in a dilemma - do I get another company of Liebgarde to finish the regiment, or do I work on the principle of "a change is as good as a rest" and get myself a company of grenadiers?

I'm rather tempted by the idea of having the regiment completed; a couple of packs of Crusader Miniatures musketeers and a Wargames Foundry command pack will do it nicely (although I will need to source a colonel on horseback eventually - probably be a Foundry job).

...sort of. I have had a bout of flu, which has rather put the last few days off-kilter. I did manage to get out of bed long enough to finish off the first eight of the Liebgarde, giving me half a company plus its command to mark as complete. Well, apart from that flag. 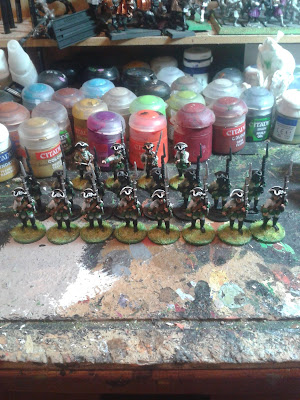 I've started work on the remaining eight men, and hopefully before the New Year I'll have the first company finished.

Currently I am listening to The World Tonight on BBC Radio 4, and a small piece on the lunacy of the Oxford Left (which is, as far as I can make out, yet another petit-bourgeois authoritarian anti-liberal offshoot of the post-Stalinist Marxist 'left') and their demands for the removal of the statue of Cecil Rhodes.

An excellent comment from a fellow whose name and position I didn't catch, who said "the heroic pose of these figures and the way they were seen then does not mean that we see them in that light nowadays." Rhodes' statue is a product of its time and place; a talking point and a piece of history - not just of art, but of Britain's imperial past. The terrifying realisation that there are students - students! - at that august place of learning and ideas, Oxford, who wish to destroy and delete and alter history because the horrors of the past jar with modern thinking is ... well, it's deeply troubling and upsetting to say the least.

But then I am an old-fashioned sort, who believes in the primacy of freedom of speech and thought, and who is of the opinion that universities should be filled will all ideas, no matter how rancid or insane, so they can be discussed and debated and dismissed, or agreed with, by generation after generation of people.

It is unlikely there is much place for that sort of thinking now, in public discourse. So I shall retreat into the fantasies of Imagi-nations and other games and play - it's nicer!
Posted by The Worker at 14:31 3 comments:

So I've been busily painting today (I've had a day off in lieu, can you tell?) and have managed to get the first company of the Liebgarde to the following point: 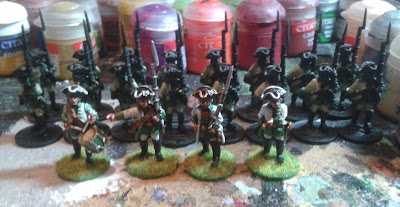 The command group is finished, and the infantry have had the base colours for their coats, shirts and breeches done. I'm using Games Workshop paints (because that's what I've used since I was 10), and for the interested (and my own future reference) they are:

I'm at work tomorrow but I hope to be able to get at least a couple more stages done on the guardsmen. Stay tuned!
Posted by The Worker at 15:46 1 comment:

The Moving Finger writes; and, having writ,
Moves on: nor all your Piety nor Wit
Shall lure it back to cancel half a Line,
Nor all your Tears wash out a Word of it.
~ Omar Khayyam (trans. Fitzgerald)

The Worker
I'm 29, have a six year old son, wargame, and work in a call centre.